The Galapagos are the Best Fall Vacation Destination of the Year. Here’s why.

Explorers from the Northern Hemisphere that are looking for a fantastic place to enjoy this Autumn Season are in for a huge treat when they see what the Galapagos Islands have in store for them! Especially during this wholly unique season in the archipelago (hint: it’s nothing like the traditional autumn season up north)! Here’s a look at some of the biggest reasons for why you should put the Galapagos Islands on your map of places to visit and travel to for your Fall Vacation this year.

1. Weather in the Galapagos is exquisite and makes for an excellent fall getaway

We’re here to let you in on a little secret: An Autumn Vacation in the Galapagos coincides with one of the best times of year to visit the archipelago, particularly when it comes wildlife and weather! 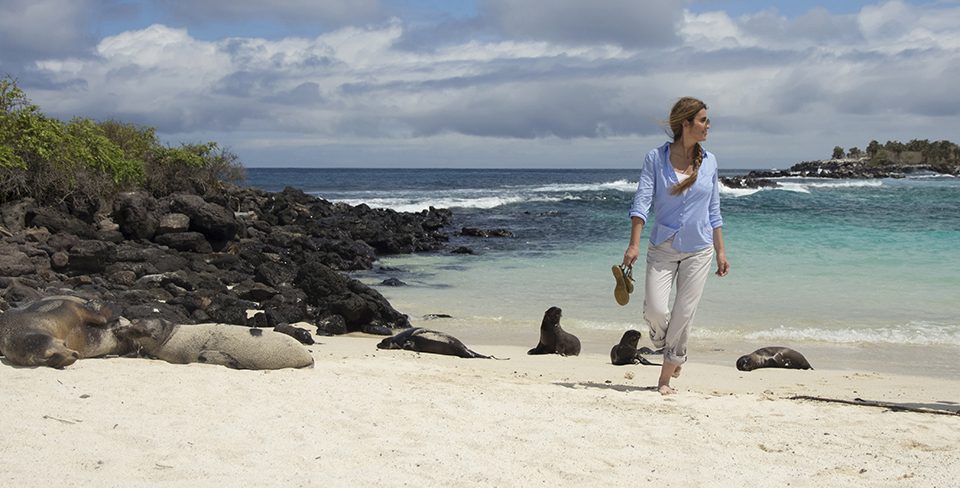 Breathe in that fresh air, feel the warmth of the sun on your face, and admire the scenery and wildlife! These are the prime time months to enjoy fantastic weather in the Galapagos!

Granted, the Galapagos Islands are a year-round destination. However, the autumn months of September, October, and November in the Northern Hemisphere actually coincide with what’s known as the Dry Season in the Galapagos – a period that sees Galapagos waters teeming with activity thanks to the arrival of an abundance of nutrients resulting from upwellings and the Humboldt Current. And not to mention: the weather is immensely agreeable during this time of the year too, with sunny and clear skies widely present. So, if those chillier months have you a little cold up north, come on down and warm up in a place that truly is a world unto itself!

Already interested in making the Galapagos your Fall Vacation?

Get a cruise package with a 50% discount!

As we mentioned above, the arrival of nutrient-rich waters can only mean one thing: wildlife is feasting on the boon of food that has flowed into the Galapagos. This means that, by putting on that snorkeling gear*, flippers*, wetsuit,* and jumping into the water, you’ll be surrounded by a plethora of marine life swimming and torpedoing around you!

*Included on all Metrojourneys cruises in the Galapagos. Wetsuits are available for rent. 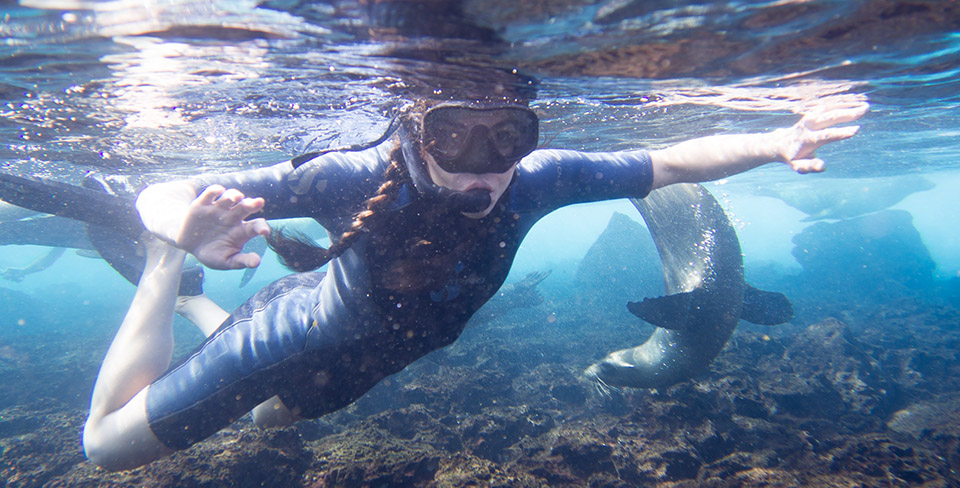 Be sure to bring that GoPro! Until you show them, your friends back home will never believe just how ridiculously close you got to playful Galapagos sea lions!

3. A Fall Break in the Galapagos means you’ll (more-or-less) have the islands to yourself

Summertime is over, meaning all the families and kids (which are a particularly common sight during the summer months) have dissipated and gone back to class and their respective hometowns. Nevertheless, this gives way to one of the most tranquil times of the year to visit the Galapagos Islands, meaning you’re in for a generally quieter and more personal experience of the jaw-dropping Enchanted Isles. 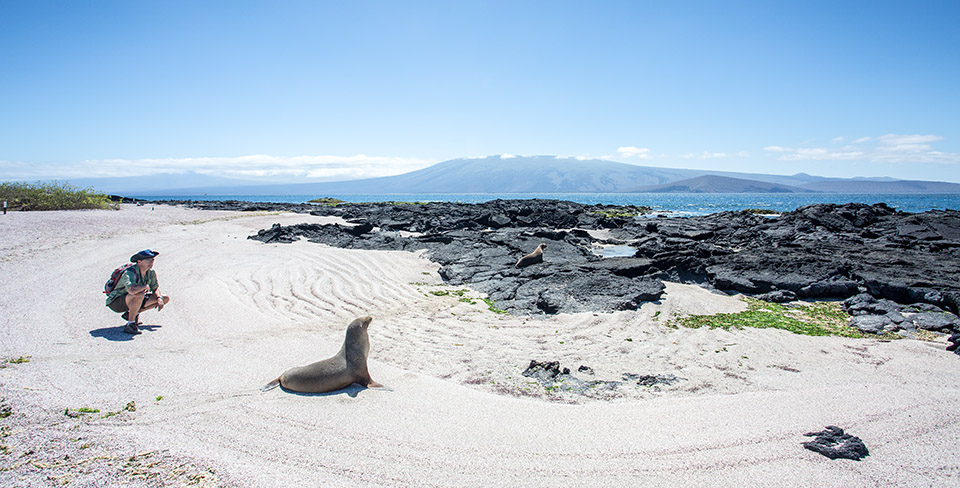 Get ready to enjoy pure shores like never before in the Galapagos!

4. Wildlife activity in the Galapagos is booming

Get ready to experience a Fall Vacation like never before! As we mentioned previously, the presence of the Humboldt Current and upwellings bring with them an abundance of nutrient-rich waters, and this can only mean one thing for the animal kingdom – it’s time to feast! Therefore, you can definitely expect to find sea turtles foraging for algae at the bottom of the ocean, Galapagos sea lions excitedly swimming around and chasing each other, and blue-footed boobies warming up their legs to partake in their adorable mating dance. Here’s a look at some of the coolest animal happenings during this unique time of year. 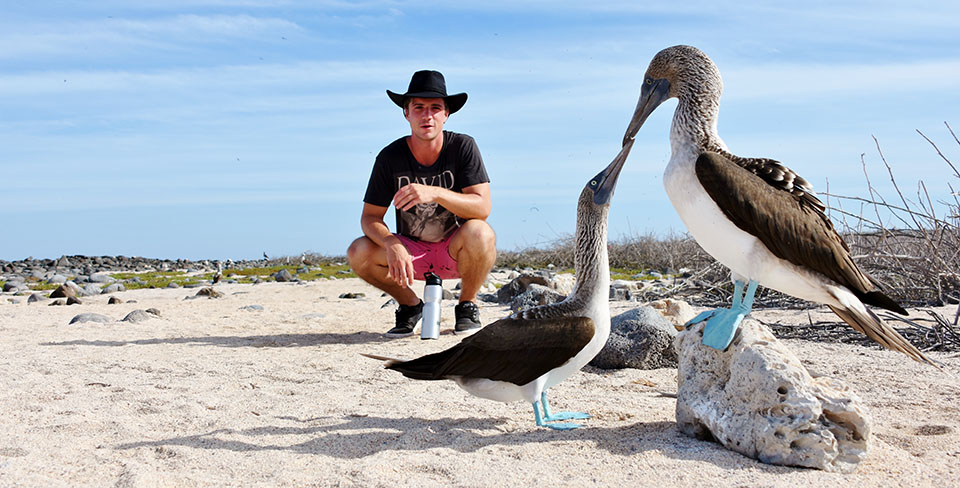 Get ready to amaze yourself with extraordinary wildlife behavior in the Galapagos!

It’s sea lion pupping season, and these little critters are more curious than ever

As a result of the arrival of nutrient-rich waters that are present during the Dry Season in the Galapagos (which makes for an optimal time for sea lion mothers to raise their young), guests will be treated to a sight that makes everyone giddy with joy: the presence of sea lion pups. That’s right, should you opt for a Fall Vacation this year in the Galapagos, you’ll get to see these adorable and young creatures as they amble and flop around on the gorgeous shores of the numerous beaches of the Galapagos. What’s more? If you’re keen on getting in the water, you’re more than likely to get to swim with them and experience their immensely curious demeanor! 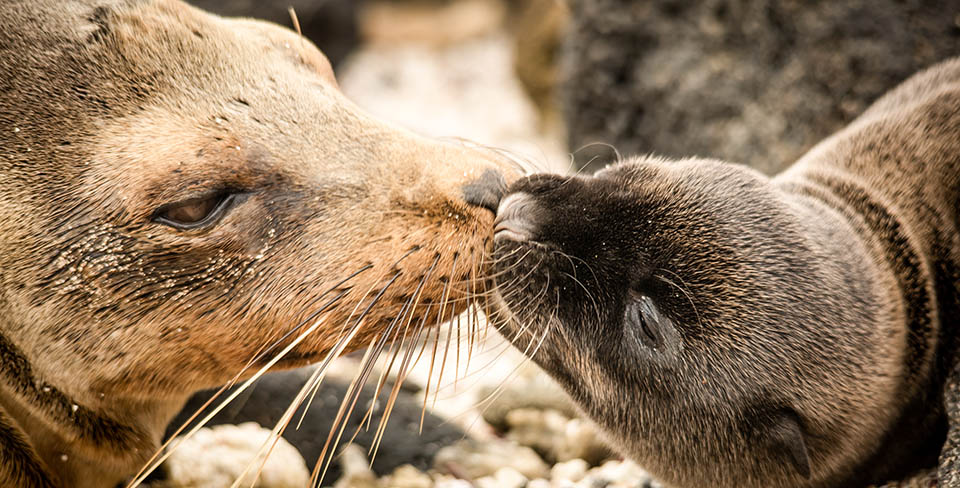 Remember: as a result of the lack of predators, animals in the Galapagos are quite fearless and even curious in the presence of humans. It’s always important to respect a distance from them of at least 6 feet (2 meters).

Albatrosses are performing their unique courtship dance, and it’s spectacular

Galapagos albatrosses are present throughout the Dry Season in the Galapagos, and even more excitingly – it’s during this time of year that they begin to perform their courtship dances once again. However, it’s not to swoon one another so much as remember one another before they migrate away in January. That’s right! Albatrosses form monogamous pairs and, in order for them to better recognize their partner when they migrate back to the Galapagos in April of next year, they need to memorize their specific courtship dance. 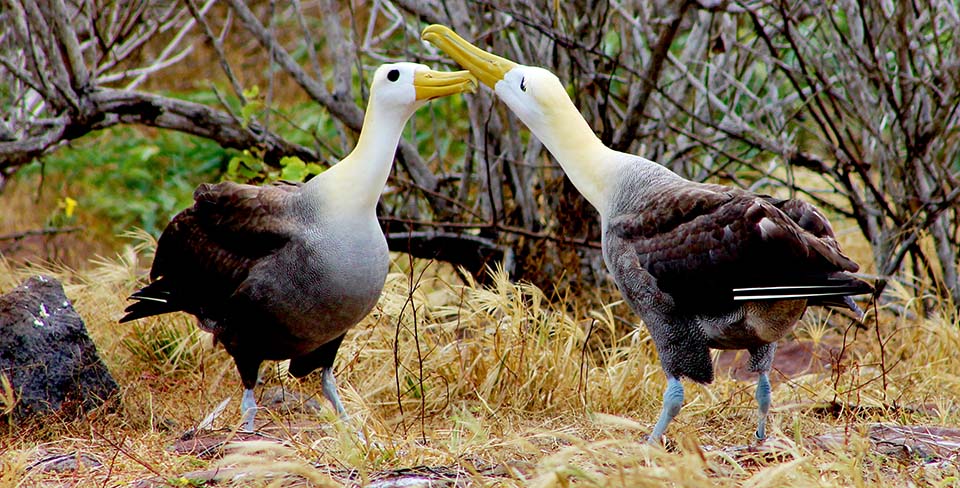 One could see this courtship rehearsal as a unique “signature” that Galapagos albatrosses put on their relationship, allowing them to verify that their partner is indeed the one they courted the previous year.

Albatross chicks are also present during the Dry Season in the Galapagos, and they’re starting to flaunt their more mature feathers, too. That’s why you might find their appearance to be a little shabby and unkempt, but nevertheless highly adorable.

So, get ready to stare in awe at these magnificent creatures during your Fall Vacation in the Galapagos, which also happen to be one of the birds with the largest wingspans in the whole world!

Land and marine iguanas are showing off their unique colors

Get ready to marvel at the unique array of colored scales that adorn iguanas in the Galapagos during your Fall Vacation in the archipelago. Towards the end of the Dry Season in the Galapagos – particularly October and November – iguanas begin to see their hormones trigger mesmerizing changes in their physiology. Male marine iguanas will begin to don red and greens that hold an intensity unlike the rest of the year, while male land iguanas will begin to showcase brighter yellows and ochers. 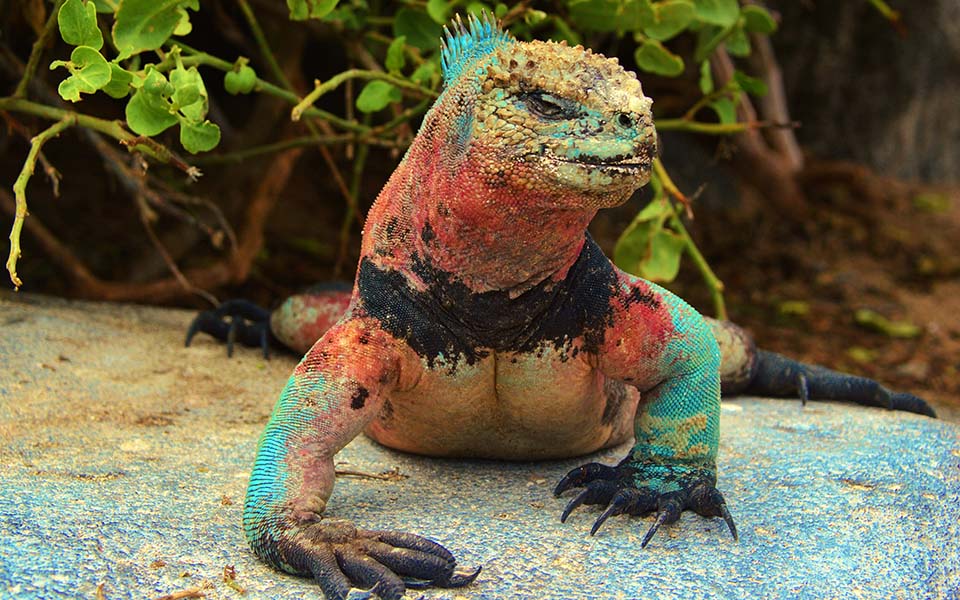 These changes are the result of the forthcoming mating season. This also means that their behavior will also start to get rather curious, too.

Granted: Hot Season (January to June) in the Galapagos is the definitive mating season for these marvelous reptiles, but nevertheless, until that time comes, you’ll find males getting increasingly aggressive with one another during the Dry Season as they gradually try to get the attention of the girls. Females, too, will become more and more territorial as they aim to secure and protect their optimal nesting site from others.

So, if you’re looking to get that postcard-worthy picture of a Galapagos iguana during your Fall Vacation this year, then this is the time to do so!

You might even get a glimpse the last humpback whales of the season as they pass through the archipelago!

September presents one of the last opportunities to see humpback whales in the Galapagos. These majestic and colossal creatures hang out in the Galapagos to raise their offspring. However, they only do so during the first half of every year. This means that, if you’re fortunate enough to plan your Autumn Vacation to the Galapagos during the month of September, you might be lucky enough to watch as humpback whale calves burst energetically through the surface of Galapagos waters to show off their budding aquatic skills. 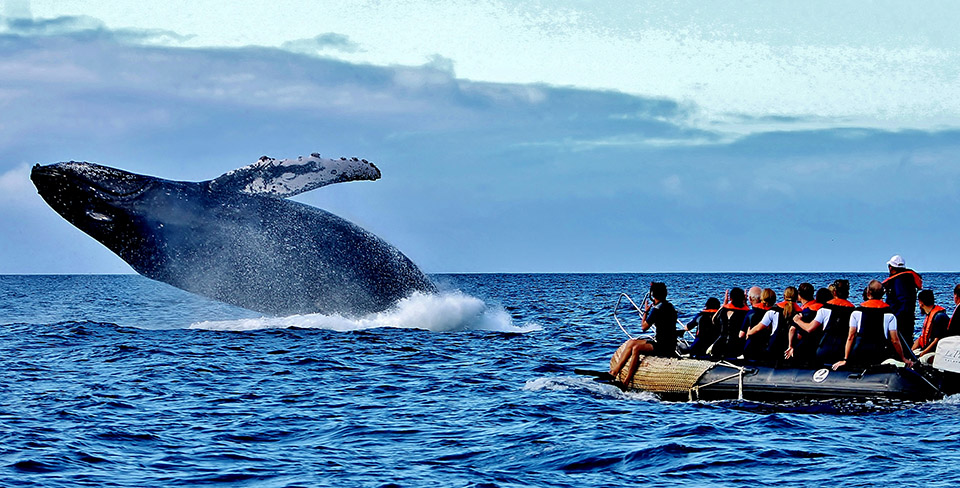 Get that camera ready! You might find them exploding through the water alongside your Galapagos cruise or, even better – just a couple of feet away from your dinghy!

Don’t forget: the Galapagos Islands are the only place in the world where you can see penguins north of the equator. During the Dry Season in the Galapagos, it’s often the case that Galapagos penguin mothers and fathers are nesting. This means they’ll also be actively foraging for food and torpedoing through the water alongside you as they head off in search of nourishment for their family! 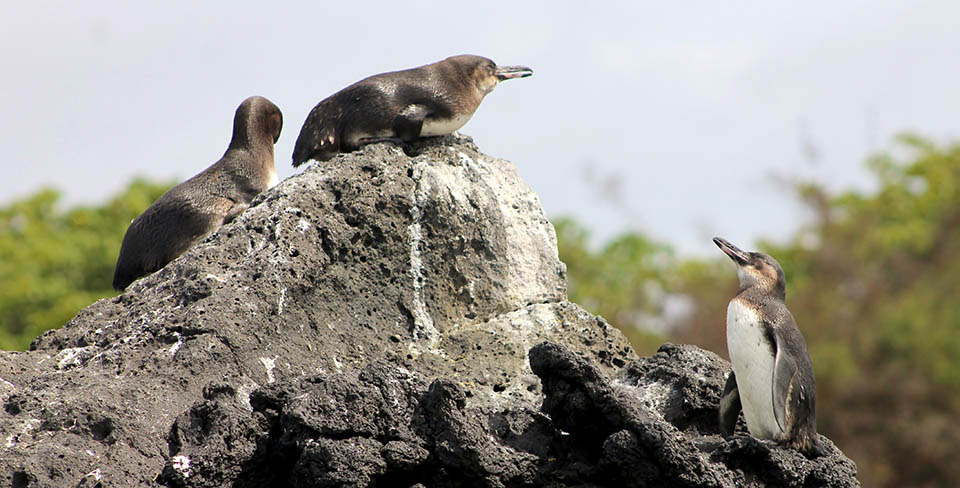 Galapagos Penguins are often found nesting during this period in the Galapagos!

A Fall Vacation in the Galapagos wouldn’t be nearly as complete if you didn’t consider the fact that Charles Darwin himself visited the islands between September and October back in 1835! It was thanks to his visit to the Enchanted Isles that we came to learn about his groundbreaking (and hotly debated!) theory of evolution. What he got to witness in the Galapagos – particularly in terms of the extraordinary wildlife that still lives there to this day – is what eventually led him to develop his revolutionary theory. 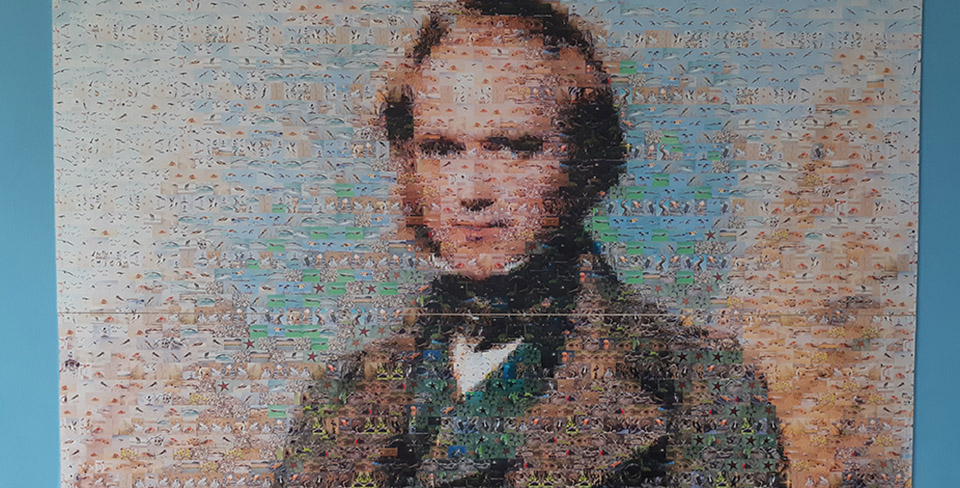 A collage of Charles Darwin at the Santa Cruz Research Station, composed of hundreds of pictures of unique species in the Galapagos Islands.

Should you find yourself booking that Fall Vacation to Galapagos at any point between the 15th of September and 20th of October of this year, you’ll be treated to a rather special moment in history. Who knows? You might even be fortunate enough to follow in history’s footsteps as you hike across the same islands that Darwin did nearly 200 years ago!

Let your concept of a Fall Vacation evolve this year,
right here in the Galapagos Islands.

Did we ignite your wanderlust? We hope so! The Galapagos Islands truly are a once-in-a-lifetime destination, and it’s a place that’s definitely worth going to this time of year, more than ever!

Get ready to make the Galapagos Islands your Fall Vacation of the year by checking out our superb Galapagos Last-minute Deal right here:

Take me to Galapagos now!

How to Enhance Your Trip to Galapagos

We all know what makes a trip to Galapagos the experience of a lifetime. The Enchanted Isles are brimming with flora and fauna species that are unique to the archipelago, not to mention a plethora of activities to explore to...

All You Need To Know About Lake Titicaca

All You Need To Know About Lake Titicaca When thinking about Peru’s most remarkable destinations, what immediately comes to mind are the ancient ruins of Machu Picchu and the nearby attractions like Sacred Valley and Cusco. In addition to these,...

Places to visit in Peru besides Machu Picchu and Cusco

Peru holds some of the world’s most sought-after travel destinations. Everyone is drawn to the mystery of its ruins, even those skeptical of mysticism. It’s common to opt for Machu Picchu, Cusco, and the Sacred Valley for a full Inca...

Top 10 Places to Visit in Colombia

It’s time to explore what awaits you in these magical Colombian places: adventure, culture, friendly people, delicious delights, and festivals aplenty! Colombia’s scenery is distinctive, and its music is bright and rhythmic. There are vibrant cities and tranquil, picturesque towns with views of...

Our Top-10 Tips for Colombia Travel

Colombia is new again and very much worth visiting! With its renewed, focus on tourism, Colombia offers something unique for every kind of traveler. Thanks to its diversity of regions, this country has something special for aficionados of gorgeous coastlines,...

You’re in good hands.
Get in touch.

Have questions? We have answers. Reach out to any of our experts to help you plan your next adventure.